Oh, gosh, it's been awhile, huh?  Well, here's my 2017 update. (I hope it won't come to me posting yearly updates, but now that I look and see I haven't posted at all this year, I'm worried for myself). 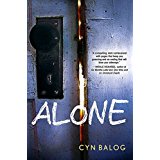 When her mom inherits an old, crumbling mansion, Seda's almost excited to spend the summer there. The grounds are beautiful and it's fun to explore the sprawling house with its creepy rooms and secret passages. Except now her mom wants to renovate, rather than sell the estate―which means they're not going back to the city...or Seda's friends and school.

As the days grow shorter, Seda is filled with dread. They're about to be cut off from the outside world, and she's not sure she can handle the solitude or the darkness it brings out in her.
Then a group of teens get stranded near the mansion during a blizzard. Seda has no choice but to offer them shelter, even though she knows danger lurks in the dilapidated mansion―and in herself.

And as the snow continues to fall, what Seda fears most is about to become her reality...


Reviews are already coming in.

"Each new bit of information builds, and in a house full of potential victims, readers will be compelled to rush and unravel the twisted mystery. A bloody, wonderfully creepy scare ride." - Kirkus


“Even careful readers will be caught off guard by twists and unexpected but divine surprises. This first-rate thriller delivers everything a thriller should, and adds more. With a wink and a nod to Stephen King’s The Shining, Balog provides a shocker for the young adult crowd.” -- VOYA, 5Q 5P "Perfect 10"

Also, if you like twists (I do, too, obviously) and haven't had a chance to read UNNATURAL DEEDS, you should! It's coming out in paperback in November and the new cover is, as my dad is fond of saying, TO DIE FROM.  Poor mothy. 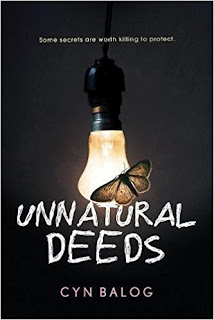