I've been waiting to announce this for what seems like ages-- though it really hasn't been. But I've been excited, and time always seems to drag when you're waiting for something! So without further ado, here it is:

I am so excited to have sold my 8th contracted book! This one is a little different-- a twisty dark contemporary. As the title, taken from Macbeth, would suggest, UNNATURAL DEEDS is also a story of obsession, desire, and betrayal. It's about a shy and awkward girl named Vic who meets the suave, effortlessly popular new boy at school named Z and gets in way over her head.

My path to this book deal wasn't easy. I had quite a few starts and stops while writing it, and many people told me it wouldn't sell. Not to mention, the market for YA is ever-tightening as more and more YA books crowd the market. So I'll be honest and say I had little hope for the book when it went on submission this March, despite the fact that several people were VERY passionate about it. I had amazing readers who are also amazing authors in their own right-- all of whom were very positive about the book. But most positive of all was Mandy Hubbard, who has been my critique partner for over 10 years and is also now my agent. When was considering shelving the book, she looked at it and said, "Pfft, I could sell this," and gave me a list of changes to consider.

So I made her edits and I'm happy to say that I had interest from editors and sold UNNATURAL DEEDS faster than any book I've ever put out on sub, in a little over one month.

Which just goes to show you how subjective this business is, and why you should never give up. It only takes one person to fall in love with it.

So now, instead of waiting for the announcement, I'll switch to waiting for the day I can finally share the finished book with you. Fall of 2016 will be here in a heartbeat!
Posted by Cyn Balog/Nichola Reilly at 12:31 PM 2 comments:

I've been busy! Writing like crazy. Planning a few events for the fall, including YA Fest and RWA NJ. Just trying to step back and enjoy things instead of constantly looking at the business end of things, which can really zap the creative energy. Don't get me wrong, being published is GREAT, but after some time of doing it, you start thinking "what'll sell? what'll sell? what'll sell?" and sometimes that overshadows writing what you love.

Anyway, this month, I noticed a small box on my doorstep, and what should be in it, but the audio books I'd been anticipating, PLUS more copies of DROWNED.  Paperback ones. I scratched my head. I didn't expect them, and especially didn't expect to see them with the bright red SCHOLASTIC name on them, since heck! I'm published by Harlequin!

But then I realized it was all part of this: 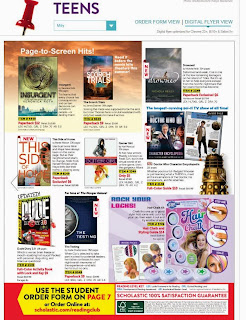 And so now I am happy. And if you have a teen in your life, hey-- six bucks for a book. Gotta love Scholastic Book Clubs. :)
Posted by Cyn Balog/Nichola Reilly at 7:33 PM No comments: