Whoa, it's been a while!

Hi, there! I'm still alive, still writing books, and can't wait for some of my new ones to release!


First, there's Unnatural Deeds, coming out November 1, 2016! It's a twisty, dark contemporary thrilled, and this is what it's about:


A novel of infatuation and obsession, Unnatural Deeds has an electrifying ending that readers won't see coming.


Victoria Zell doesn't fit in, not that she cares what anyone thinks. She and her homeschooled boyfriend, Andrew, are inseparable. All they need is each other. That is, until Zachary Zimmerman joins her homeroom. Within an hour of meeting, he convinces good-girl Vic to cut class. And she can't get enough of that rush.


Despite Vic's loyalty to Andrew, she finds her life slowly entwining with Z's. Soon she's lying to everyone she knows in an effort to unravel Z's secrets. Except Z's not the only one with a past. Victoria's hiding her own secrets, secrets that will come back to haunt her...and destroy everything in her path. 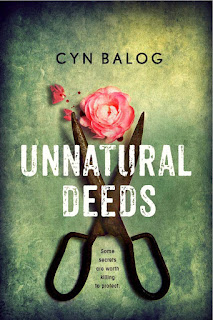 So far, reviews have been trickling in, not that I try to pay much attention to them. But so far people have been extremely kind and flattering of it, which makes me happy.


But that's not all. I have more exciting news. I'm re-releasing DROWNED, as well as it's three other companion books, later in the year.  The new DROWNED, which is actually Book 2 in the series,  is out now: 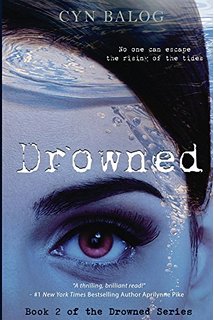 Coe is one of the few remaining teenagers on the island of Tides. Deformed and weak, she is constantly reminded that in a world where dry land dwindles at every high tide, she is not welcome. The only bright spot in her harsh and difficult life is the strong, capable Tiam—but love has long ago been forgotten by her society. The only priority is survival.

Until the day their King falls ill, leaving no male heir to take his place. Unrest grows, and for reasons Coe cannot comprehend, she is invited into the privileged circle of royal aides. She soon learns that the dying royal is keeping a secret that will change their world forever.

Is there an escape from the horrific nightmare that their island home has become? Coe must race to find the answers and save the people she cares about, before their world and everything they know is lost to the waters.
﻿

But the actual order is this:


The first book in the series, BURNED, is coming August 1!: 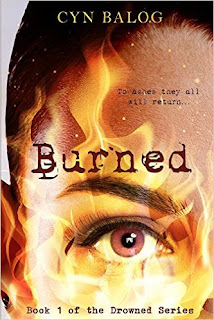 I’ve heard tales about the sun and the moon. My mother used to tell me they were never in the same place in the sky, and that once, people would tell the time of day by them. She was never fortunate enough to see such a thing with her own eyes, but her own parents spoke wistfully of them often, making the world above, the world lost to us so many years ago, seem magical and fantastical.

In my wildest dreams, I never thought I would see that world.

Spoiled, pampered Aliah has found her way to someplace very different from her technologically-advanced underground world. A place where people fight for survival, and even the king is a violent savage. The inhabitants of this place are all coming to terms with a frightening reality: Inch by inch, the kingdom of Tides is dying.

But are these people truly lost? The more time she spends with King Wallow, the more she begins to settle in, and forget the life she left behind. Still, this kingdom is not kind, and there are horrors and secrets behind every wall. Is it possible to survive, or is finding a way back home her only chance?

The last two books will come later this year and sometime next year. I'll tell you about those soon! :)


So, what else have I been up to? Well, not much.  Let's see. I recently became a consultant for Perfectly Posh because I LOVE their products.  Crazy, right? I never thought I would ever sell anything like this, but I love it so much I had to feed my addiction. I am having so much fun doing it!  If you haven't checked them out, please do! And hit me up at my Posh group on facebook or via email at cyn at cynbalog dot com because I LOVE talking about Posh almost as much as I like talking books. Which says a lot!!