Time Flies. I can't believe we're only a month away from the release of UNNATURAL DEEDS! Yep, it's coming out November 1.

I've also sold audio rights to Forever Young Audiobooks, so I'm thrilled to say that an audiobook will be coming out sometime in December!

I've talked about my less-than-glamorous release days before, but this one is different!! Because I'm going to have a launch party (my first since Fairy Tale in 2009)!!!  It's happening on November 13 at the Center Valley, PA B&N at 1PM. There will be fun and shenanigans, if I can get my shenanigan suit on. If you can be there, I'd love to see you! 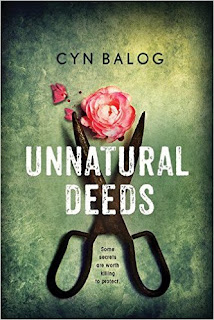 A novel of infatuation and obsession, Unnatural Deeds has an electrifying ending that readers won't see coming.
Victoria Zell doesn't fit in, not that she cares what anyone thinks. She and her homeschooled boyfriend, Andrew, are inseparable. All they need is each other. That is, until Zachary Zimmerman joins her homeroom. Within an hour of meeting, he convinces good-girl Vic to cut class. And she can't get enough of that rush.
Despite Vic's loyalty to Andrew, she finds her life slowly entwining with Z's. Soon she's lying to everyone she knows in an effort to unravel Z's secrets. Except Z's not the only one with a past. Victoria's hiding her own secrets, secrets that will come back to haunt her...and destroy everything in her path.

"Like a PG-13 version of Gone Girl (2012), Balog's (Dead River, 2013, etc.) latest tells the tense and tragic story of three teens mixed up in a world of murder, obsession, and mental illness... A page-turner that will keep readers riveted, this is a treat for mystery fans and will keep readers guessing right up until the end."" - Kirkus"Unnatural Deeds is a compelling, dark confessional with pages that  keep you guessing and an ending that will blow you sideways." - Natalie D. Richards, author of Six Months Later and One Was Lost
Posted by Cyn Balog/Nichola Reilly at 7:37 PM No comments: