I really don't know what to call this post, other than the "my-husband-checked-my-blog-and-called-it-pathetic-because-I haven't-updated-in-so-long" post. So really, that title is for him, since he snoops on my blog. But also for you. You are quite attractive as well.

So let's see.  News.  DEAD RIVER is releasing in only a few weeks!  Are you excited?  This will be my fifth book and I'm kind of shocked I've lasted this long. (Okay, I almost didn't.) 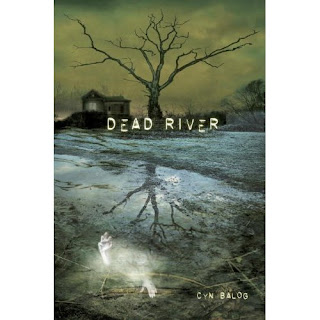 Anyway, it's based on a whitewater rafting trip I took with my husband and his friends on the Dead River in Maine.  (Side note to Mainers: I am sorry to disappoint you if you thought this was a book about the gas station). We lived in Maine, once, a million years ago, until the madness set in. Being quite timid and completely unadventurous, it's a wonder I even made it out on a river called The Dead. What was I thinking?  I will tell you three things I learned during that trip:

My husband actually texted the poor guy who arranged the whole thing and made the mistake of inviting us. He was excited to be mentioned in the acknowledgments and promised to "single-handedly make Dead River a bestseller in Maine." After he gets over the trauma of reliving that terrible event. So if you live in Maine, please do not let this guy down.

This is the cover blurb:

My friends and I are spending prom weekend at a remote wooded cabin on the Dead. The Dead River.

I thought it was going to be just us.

Nothing is what it seems in this creepy paranormal thriller by Cyn Balog.

I know!  Doesn't it sound like Jason will be involved? He isn't, but that would probably be just my luck if I ever decided to go rafting on the Dead again. Jason shows up in his freaky hockey mask, or creepy hands come out of the water a la the cover. Trust me, you do not want to go with me next time.  Which, there will NOT be a next time. For the above reasons.

If you would like to check it out, go here.  And I can't lie, I would love if you would buy a copy, too.

Also, Nichola Reilly, that little vixen, is working on her 2014 edits and just gearing up to write the sequel! Gosh, I hate talking about myself in the third person. No wonder writers are crazy.